HISTORY OF THE LIBRARY

The Prevalence of Spirit 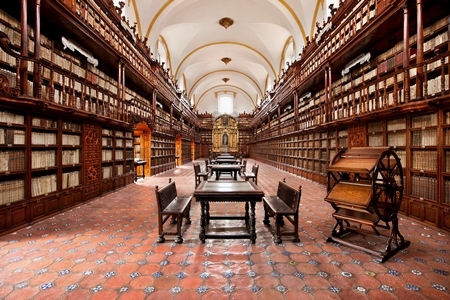 When, in 1646 the bishop of Puebla, Juan de Palafox y Mendoza, donated a rich and select personal library of 5,000 volumes to the Tridentine College, he thought of the formation of the clergy, but also of the society of the city of Puebla. He therefore established, also, that anyone who could read was to be allowed inside this magnificent library. As a seminary library, it was also a library with a broad range for reading, one not limited to knowledge about God and his church, but to the study of all that might occur to the pen of man, and in order that man might have strong arguments to defend the faith.

By 1773, then Bishop of Puebla, Francisco Fabián y Fuero, established the principal nave of the Palafoxiana Library at 43 meters in length such that the population would have access to the collection of Bishop Palafox. The bishop also had two floors of fine shelves built in fine ayacahuite, coloyote and cedar.

The collection increased with donations from the bishops Manuel Fernández de Santa Cruz and Francisco Pablo Vázquez, and by the inclusion of the library of the Jesuit College. Today, some 45,059 volumes dating from the 15th, 16th, 17th, 18th, 19th centuries coexist with a few from the 20th century.

History has been kind to this center of universal knowledge, one of the first libraries in the Americas, and the first to offer freedom of entry to everyone. Through its carved wooden door have never passed the excesses of tyranny nor the ignorance of man.

Yet intact in its structure, the Public Library of another time (the Palafoxiana) added to the collections of old books with a large collection of pamphlets and broadsheets, as well as manuscripts and materials essential to the study of the history of Mexico.

In 1981, the Library was declared a National Historic Landmark. In 2005, the variety and richness of the collected literature earned the Palafoxiana recognition as a “Memory of the World” site from UNESCO. The Library thereby acquired still more responsibilities and tasks in preserving for another thousand years, in the service of science and culture, as was first wished by Bishop Juan de Palafox y Mendoza.